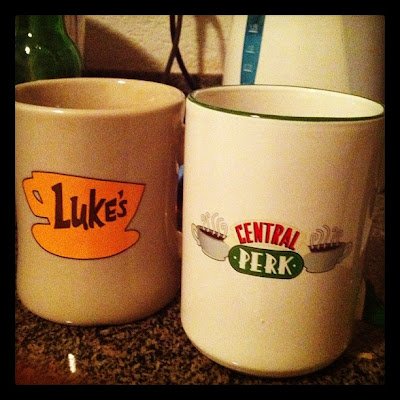 My tv show mugs. One from Central Perk (the coffee shop in Friends) and one from Luke’s (the diner in one of my all-time favourite indulgences, Gilmore Girls) I’ve used both of the mugs. The Luke’s one has a lovely shape to hold while warming your hands. The Central Perk one is probably prettier to look at. I prefer to drink from the Luke’s one but neither of them are big enough.

While we were in LA, Keris booked us onto a tour of Warner Bros studios in Burbank. We drove out there on the Friday. What was supposed to be a half hour trip on the freeway took at least twice as long as that and we were late. Luckily though, the lovely people (and they were, we didn’t meet a single grump) at Warner Bros sent a chauffeur out for us and caught us up with our tour.

You get a two hour tour of the studios which includes a visit to a set of a current tv show (Chuck, in our case), a visit to the prop house where they store all the props used in tv and movies, a visit to their museum stapped full of fab costumes (The Departed & Inception were my faves) and props from classic and modern movies and a visit to the set of the Central Perk set from Friends. 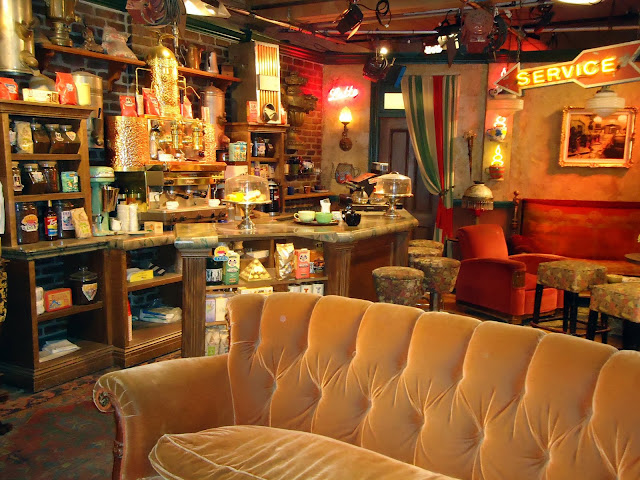 This set from Friends was supposed to be sent to a big museum somewhere and had been packed up and was in containers, ready to be sent when the show had finished. Our guide told us that Jay Leno had requested an interview with the six stars from Friends and asked if it could be on the set from Central Perk. So, the good people at Warner Bros set it all back up again and the decision was made to keep it at Warner Bros where visitors to the studios could see. A great idea. I was certainly quite thrilled to see it.

The set itself is very small and filled with objects and furniture I’d never noticed in all the years I’d watched it. Our guide told us some of the tricks of the trade to make the sets look bigger. Clearly, they work!

Keris and I also managed to talk our guide into taking us on a tour around Stars Hollow, the town square set from Gilmore Girls. It was dark by the time we got there so we didn’t manage to get any photos but it was so cool to be there. keris and I pointed out all the landmarks from the show to each other and I audibly gasped when I saw Luke’s Diner on the corner with its big plate glass windows. I am such a sap.

And after it all, we spent too much time in the gift shop ooohing and aaahing and, in my case spending too much money on the various mugs from our fave shows. Still, I wish I’d got the Dragonfly Inn one and the black Central Perk one too…….