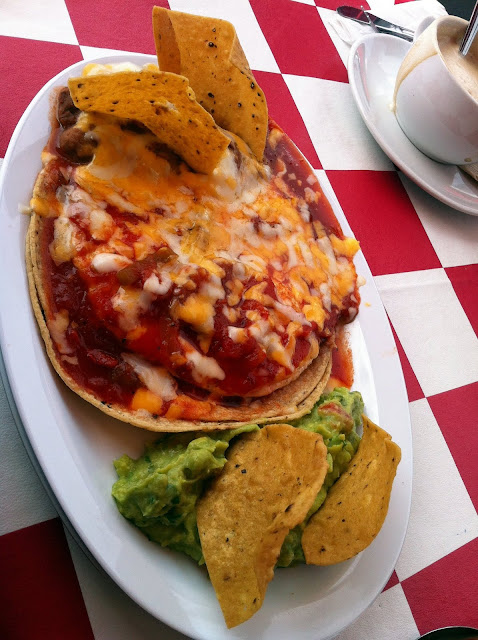 Awwww, our last day in Los Angeles. The weather was fantastic. Lots of blue sky and sunshine. We went for a wee walk around the canals again before heading to the Sidewalk Cafe. Our one-armed waiter (no jokes- he was ace) said, “Hello again, ladies!“* The Sidewalk Cafe had become our local. This time I chose Huevos Rancheros. It was tough but I chose them because it’d be unlikely I’d ever find Huevos Rancheros out in the Zürioberland.

So, the eggs were excellent but not quite as excellent as the musician playing across the other side of the boardwalk from us. He played rock classics on his guitar and was just amazing. After he played, he came over to collect some cash which I happily handed over. When he heard our accents he asked if we’d been watching the Rugby World Cup. Turned out he was a Kiwi and was ever so proud of his All Blacks. As well as his daughter-in-law who is studying at St Andrews. Oh yes, he was chatty.

But, before we had our brunch, we had a wander through the Venice canals, seeing what they looked like in the gorgeous blue sunshine. Turns out, they can be more gorgeous. 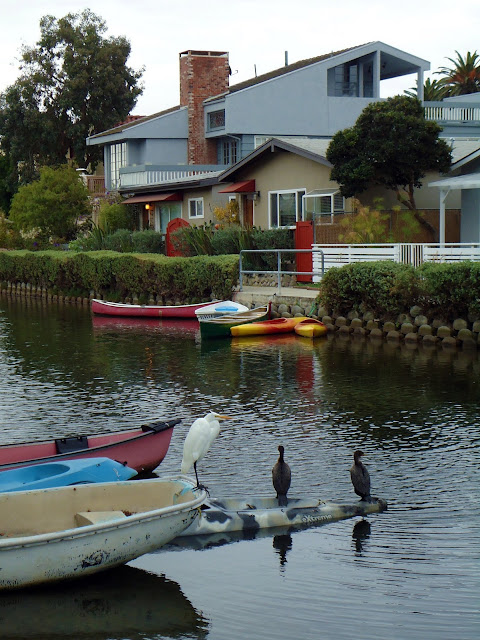 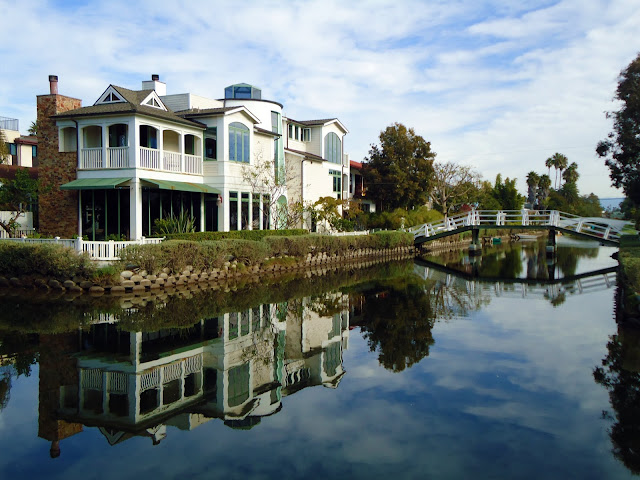 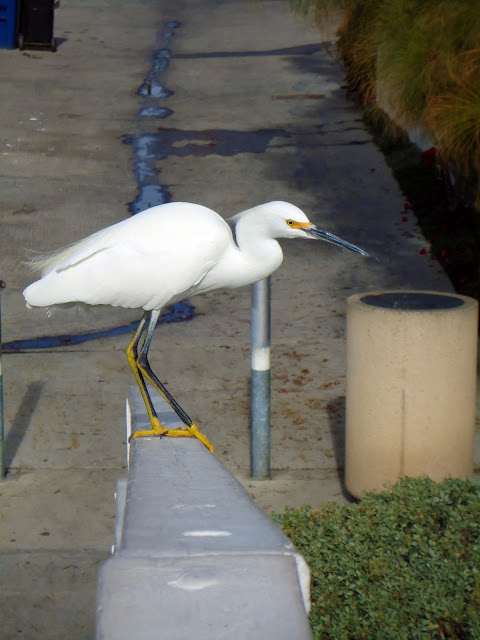 And more from the Venice boardwalk…. 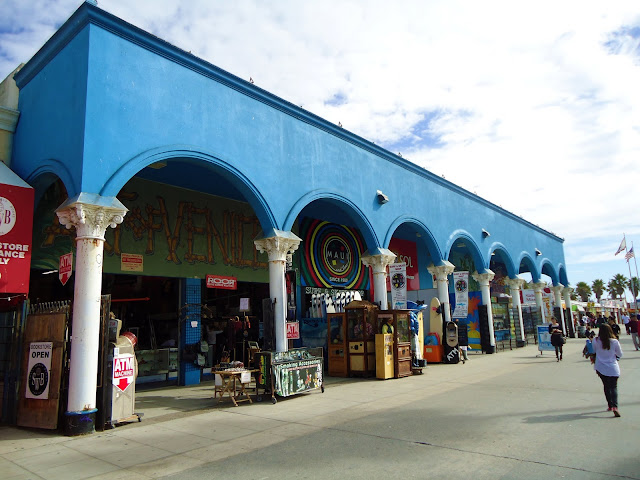 It was at the end of this building that Keris and I saw a man sitting down, back to the building (you can see him if you look very closely) holding a battered bit of cardboard saying, “Honestly Hungry.” He seemed to strike a chord with both of us as we dug into our pockets and gave him a dollar or so each. When Keris handed him a dollar he thanker her profusely. When I handed him a dollar her jumped up, said, “Yes!” very excitedly and, after thanking me, went to the kiosk behind to buy himself something to eat. It was a strange blend of tragedy and comedy. Certainly a moment I don’t think I’ll forget. 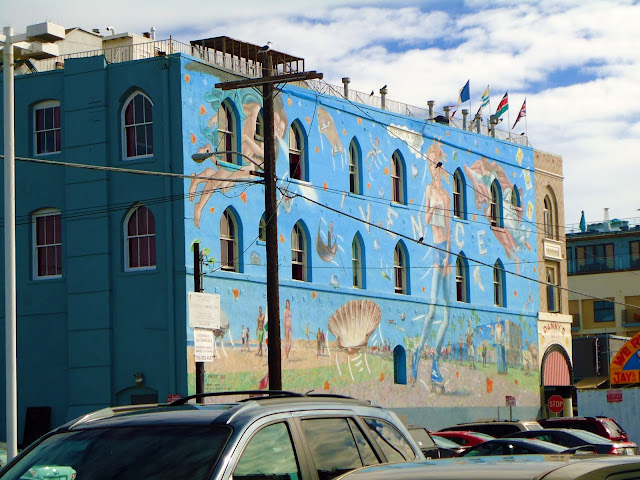 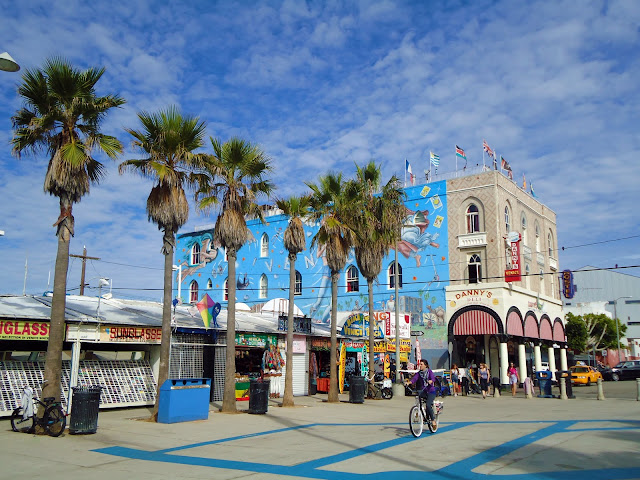 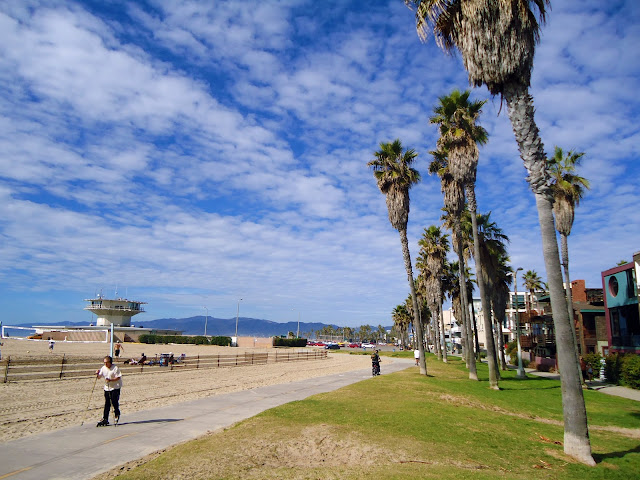 Keris and I had decided to leave the beach for the afternoon and take the car up to the Griffith Observatory, up in the hills. It was a great idea. The afternoon sun was perfect, the drive was delightful and the views from up there were stunning. 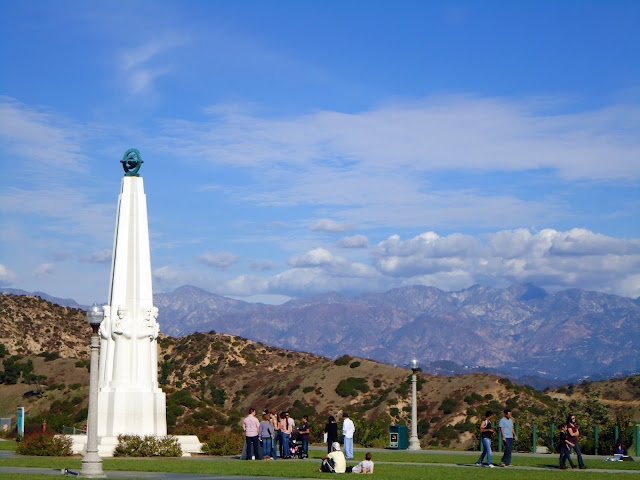 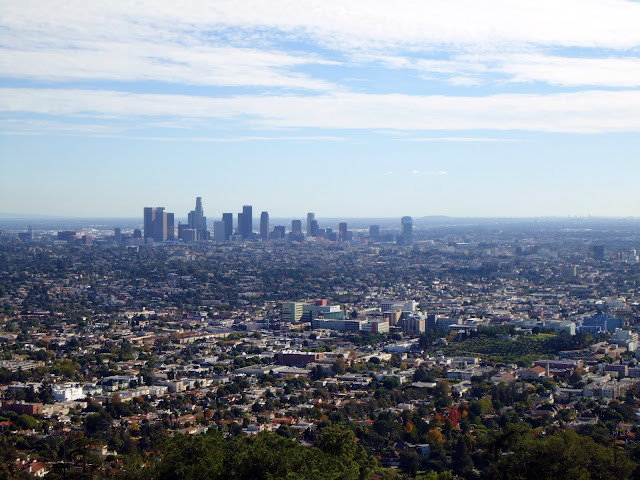 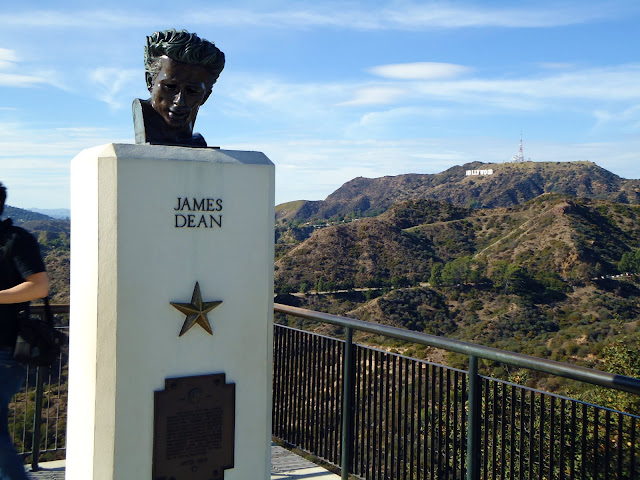 The Griffith Observatory features prominently in the James Dean film, Rebel Without a Cause. 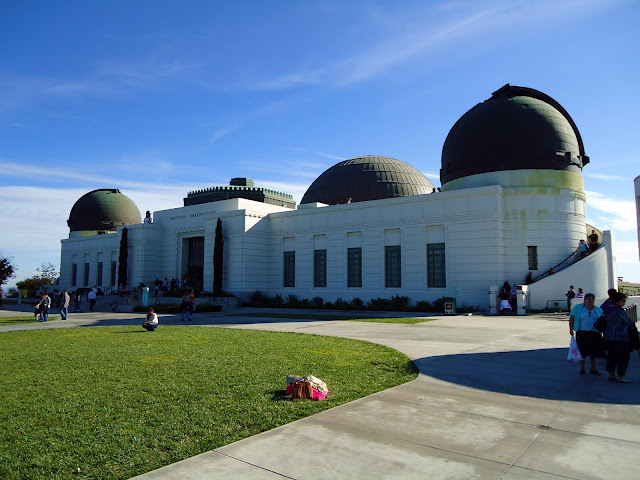 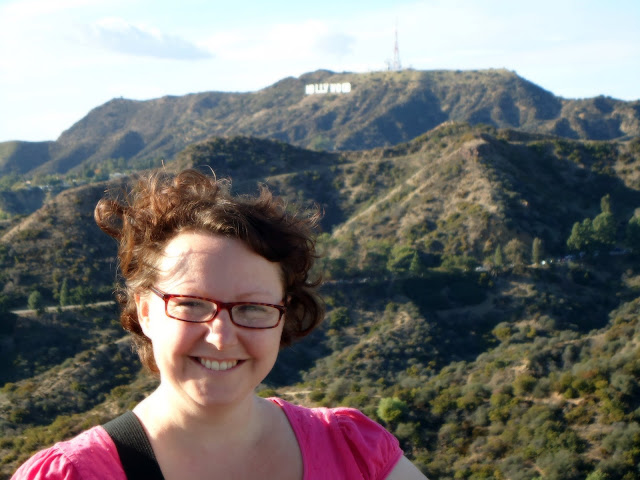 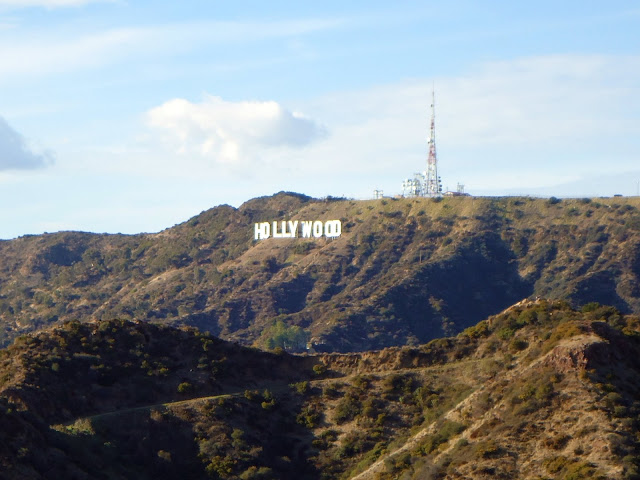 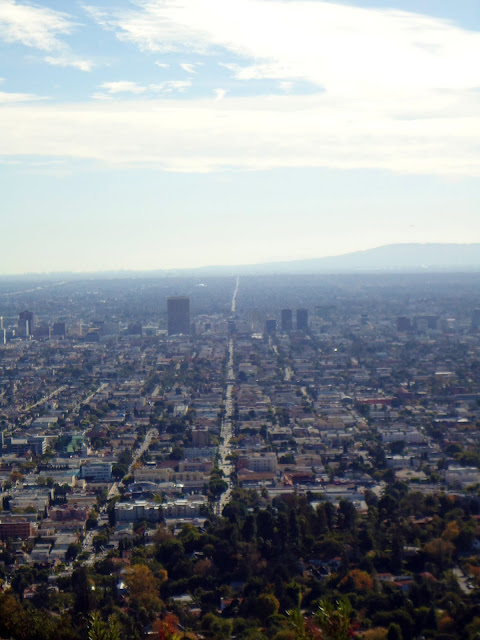 Look how long that road is!

After the observatory, we decided we wanted to watch the sun go down over the Pacific ocean. Back to Venice but via somewhere very special… 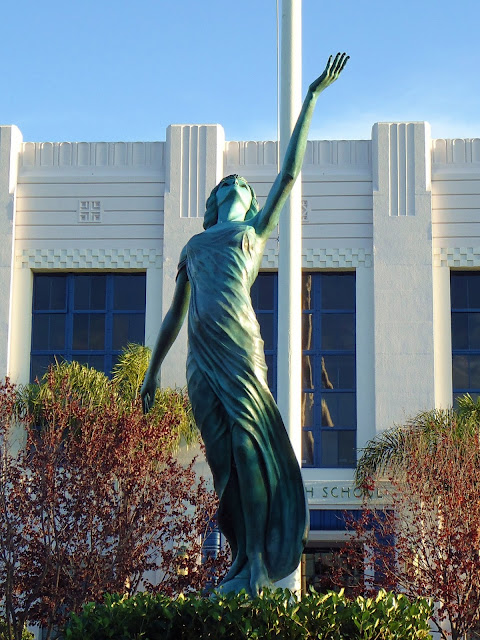 Venice High School, aka Rydell High from Grease. I was ridiculously excited to see this location from one of my favourite films (and the source of some of my favourite songs and fondest memories) of all time! 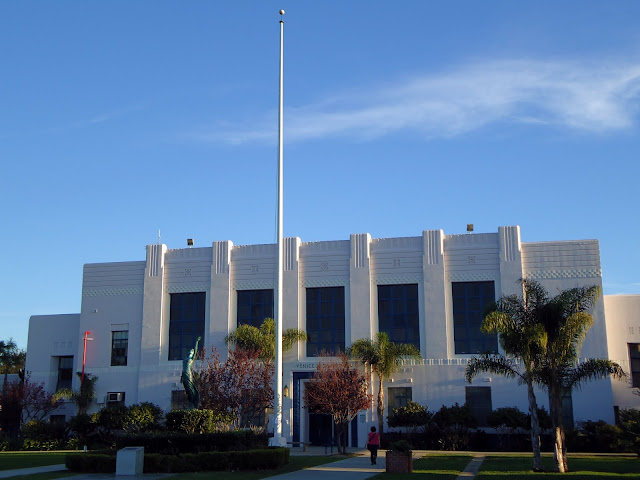 And after the extreme excitement of that, onto the more mellow but equally as wonderful sunset on Venice Beach…. 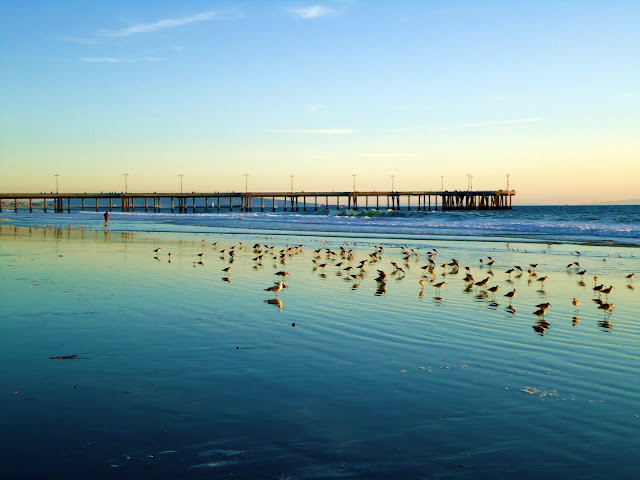 Sandpipers and Sanderling in the water. 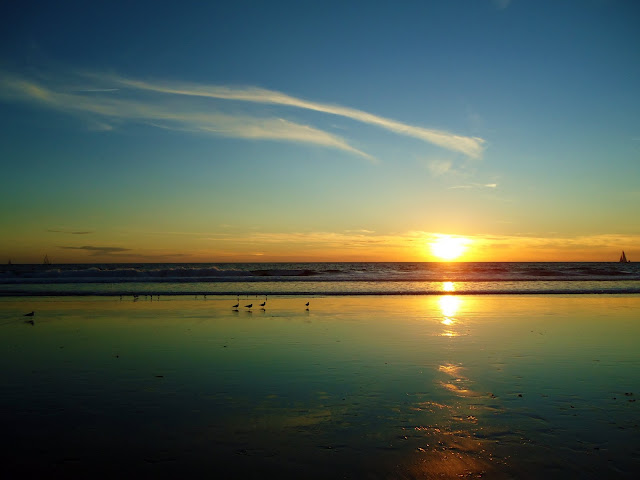 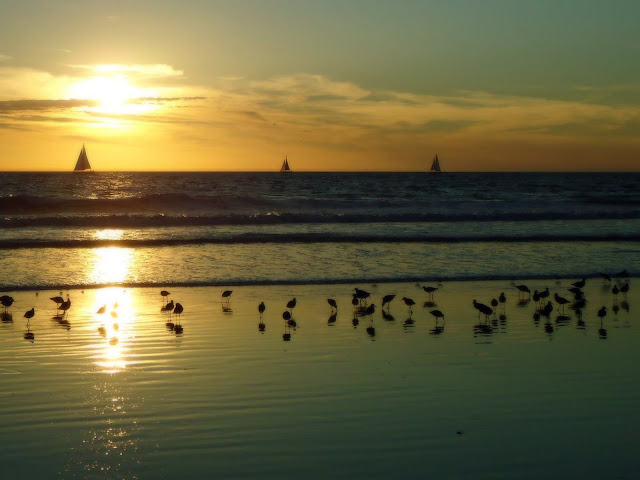 Imagine being on one of those yachts…. 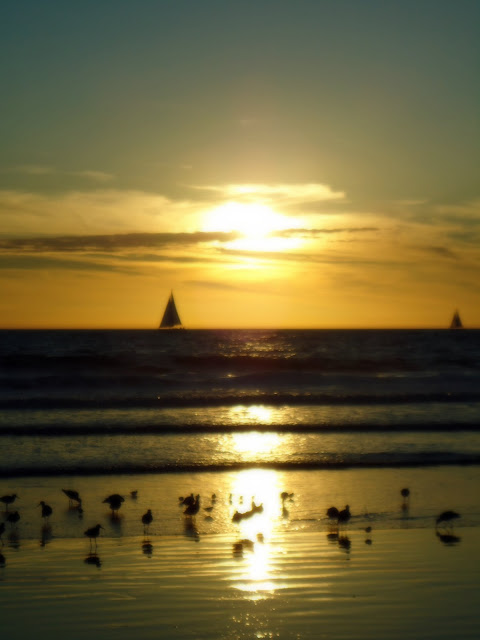 Thinking about getting this one enlarged and framed, what do you think?

And then it was time to go and have our last meal at the Sidewalk Cafe, margaritas and a John Irving Burger (cheese, bacon, mushrooms, onion and avocado- uh-mayzing!) before getting a relatively early night for our flight home in the morning.

It really was the most wonderful three days. And all thanks to Keris and her new book due out in 2012… 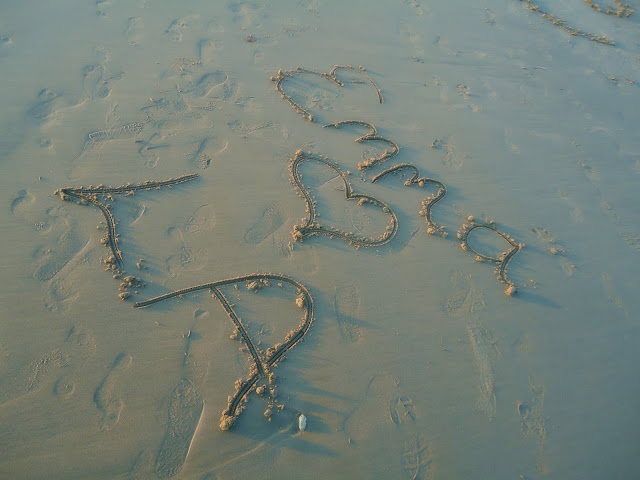 I don’t know about you but I can’t wait to read it.

*Other things people said to us included a tall fellow walking past Keris and saying, “Hey, baby!” in a suggestive voice and guy standing in front of me in the street saying, “Do you know what I would wanna do to you?” I very politely told him, “No.” I certainly didn’t stick around to find out.