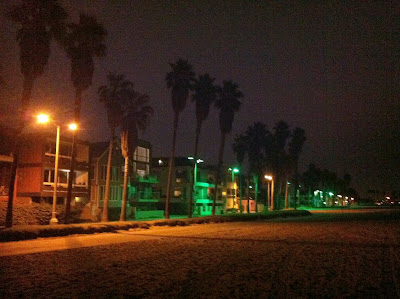 It was another day of uneventful flights across the world but Keris and I made the most of our time together and talked, talked, talked nearly the whole way. Oh, we watched some of the in-flight entertainment on the Manchester-Philadelphia leg of the trip and I dozed for much to the Piladelphia-Los Angeles leg. The trip wasn’t too arduous. I suppose, the going-there is never as arduous as the coming-home though, is it? Amazingly, when Keris and I boarded the flight from Philly (coz, like, we’re practically locals now) to LA, the fellow sitting at the window in our row was eating something which smelled amazing. It turned out to be a Philly cheesesteak, of course but I was really taken aback by the fact that someone had brought their dinner on the plane. And then the people in the row across the aisle from me actually opened a packed lunch. It was like entering another dimension where food is not served on six hour flights. Lo and behold, we actually had entered this other dimension and there was no food served on the domestic flight across the vast country of the US of A. And coz I’m a miser, I was buggered if I was going to pay for any. Somehow, probably because of my reserves, I made it all the way to Los Angeles without dying of starvation. But only just! But, to make up for the disappointment of no food and no entertainment system (honestly! On a six hour flight!) the plane had Wifi! Internet access at 30,000ft. or however high it was. I tweeted this photo of Keris and me from up in the air, baby! 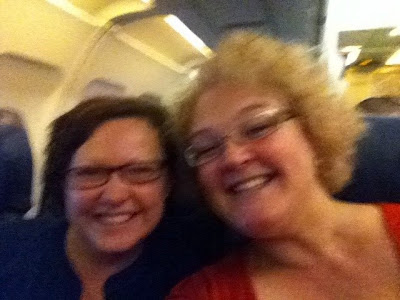 I don’t mind that I look like a total loon in this pic because I also look quite thin, don’t I?

Anyway, getting back to the original photo, after we had landed, collected our hire car and found our gorgeous apartment in the LA suburb (suburb? Is that the right word?) of Venice, we went for a walk in the night. We followed our ears (and a stranger’s directions) and found the Pacific ocean crashing against Venice Beach. We took our shoes off and went for a stroll in the sand. We found out the next day that walking on the beach after sundown is illegal. We’re such rebels. And then we had a hot dog and walked back “home”. I promptly fell into a coma of exhaustedness and readied myself, while asleep, for the next couple of days.