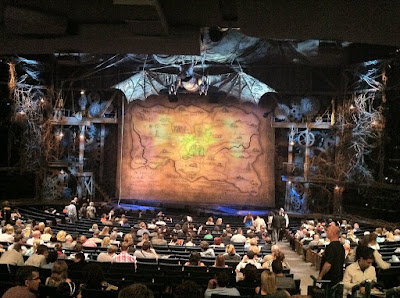 Oh no, I made a mistake! I’m going to blame it on the jet lag. When I got home and was updating my 365 Project photos, I posted two from Tues 24th May. Here’s the second one, the stage in the Gershwin Theatre, New York, all set for Wicked.

I’d not seen any musical theatre for yonks. I think the last time I went to the theatre was when my friend was in the local Youth Theatre in Dunfermline and they pout on Guys & Dolls, so it’s a long long time ago. I have a friend on Twitter who adored the musical Wicked which she went to see several times while it was on in Brisbane, Australia so when Mr Mac and I were looking for a Broadway musical to see while in New York, we chose Wicked.

Wicked is the “untold story of the witches of Oz” and is about Glinda, the good witch, and Elphaba, the bad witch, how they grew up together and how Elphaba became the Wicked Witch of the West. In it we discover how the cowardly lion, the tin man and the brainless scarecrow end up in Oz, the story of the Wicked Witch of the East and how Dorothy (although we never see Dorothy) was blown into Oz to create a load of chaos. Loads and loads of fun.

Mr Mac and I had absolutely no idea what to expect when we arrived at the Gershwin Theatre for the 7pm opening. We got there at approximately 6:40, since it was a really short walk from our hotel and took our seatss promptly. The theatre is lovely, comfy seats and a great view and with the stage all set, very atmospheric. When the orchestra started and the chorus started singing the opening number, the cynic in me had a little giggle at the chorus members who were seemingly trying their hardest to be noticed in amongst the throng but I soon let of the cynicism and honestly, we had a ball. The actress playing Glinda, Katie Rose Clarke, was hilarious channelling Elle from Legally Blonde. Teal Wickes playing Elphaba had the most amazing voice. The whole cast were fantastic, the singing and music was brilliant and I left the theatre with a huge smile on my face and a cast recording of the music. If I could see it all again tomorrow I would

Since I’ve been home, I’ve been reading up on Broadway shows, planning the next one. I think we need to go to a show and a play next time….