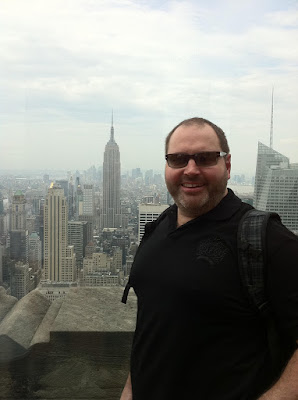 I love this photo so much!

Finally the weather cleared enough for us to make it to the top of the GE Building. We didn’t have to queue for very long and our ticket we’d bought from the Gray Line bus people included entry to the observation deck which I think is normally $22 each. We hopped into a lift at the bottom of the building and the lift operator said something like “You’re going up 67 floors and the ride will take 43 seconds.” I just about wet my pants as being in a fast lift that seems to go up and up and up for ever has been a recurring nightmare of mine in the past. Once the lift doors shut, my anxiety didn’t ease up as the roof of the lift is clear and the lift shaft is lit all the way to the top. Mr Mac laughed at me as I buried my head in his manly shoulder. But, 43 seconds isn’t so long, is it? I made it with my nerves intact.

Again, just like the Statue of Liberty, the lift anxiety* was worth it; what a grand place the observation deck is. The visibility on our day, while not quite its very best, I’m sure, was still amazing. Here are some shots I took from the Top of the Rock. Remember, you can click on all the pictures for a better, bigger look. 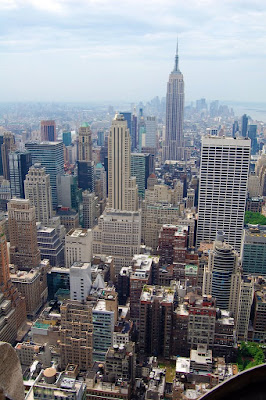 The Empire State Building lording it over the rest of lower Manhattan. 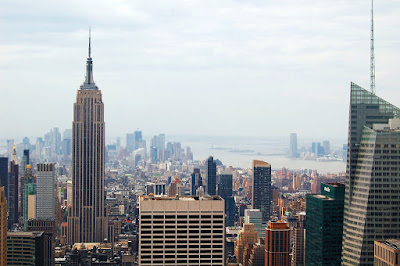 The Empire State Building and the Bank of America Building on the right. 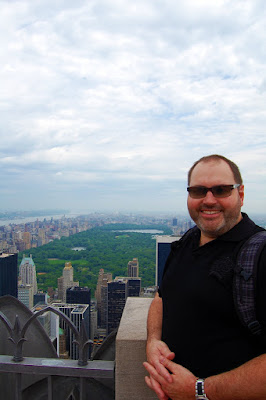 Mr Mac as Central Park stretches out over Upper Manhattan. 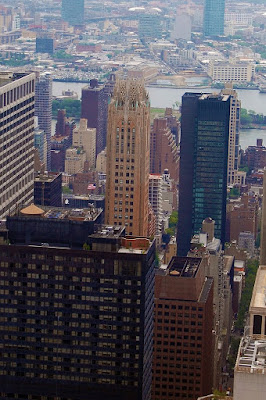 A fantastically ornate building I don’t know the name of but which captured my imagination. 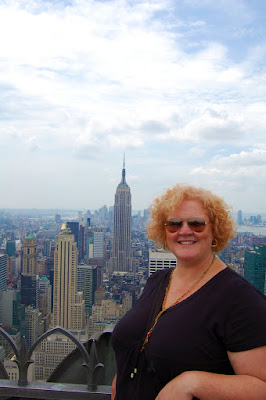 Me and the Empire State Building. 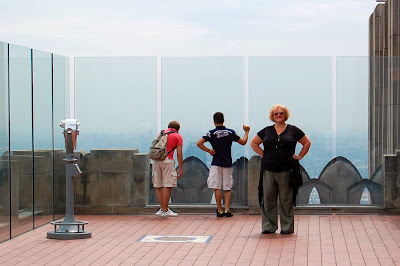 Me, after having graciously given Mr Mac five minutes with my camera. 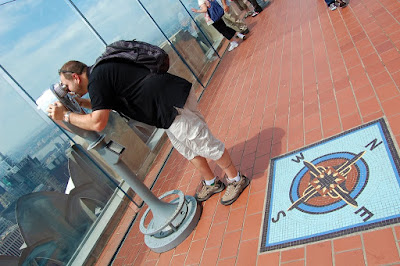 Spying on the neighbours. I suspect he was looking for the woman who we saw while on my birthday dinner- doing her makeup in her hotel room in her bra and g-string, right at her hotel room window. True story! 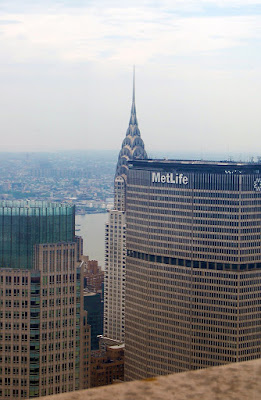 The Chrysler Building, peeping out from behind a far less attractive skyscraper. Next time (!) we’ll be going to the top of the Empire State Building so I can get a proper look at the Chrysler.

On this day we also: took a bus tour uptown to the Upper West Side and saw a building where Madonna owns an apartment (squeals!) along with loads of other sights and into Harlem, got my makeup done at the Clarins counter in Saks 5th Avenue, had an amazing late lunch at a Chinese restaurant, went to a Broadway show. More on the Broadway show later!

*I say “anxiety”, I’m not claustrophobic about lifts or anything, and am actually happy to use them but I’ve never been in lift that goes that high before!