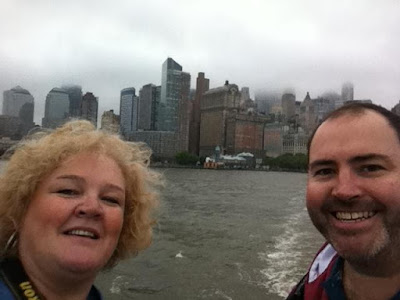 Yay! Statue of Liberty day! We started off the day by asking the concierge in our hotel what the best way to get to the Statue of Liberty was. We had an encounter with one of the most talkative, friendliest and animated young women either of us had ever met. After ten minutes with the lovely Yelena, we were in desperate need of a coffee but had been convinced to buy two day tickets to New York’s Gray Line tourist bus service- one of those open-topped things. After we bought ourselves a Starbucks from the hotel’s morning Starbucks bar, we headed over to Eighth Avenue where we were to catch an express bus to Battery Park. 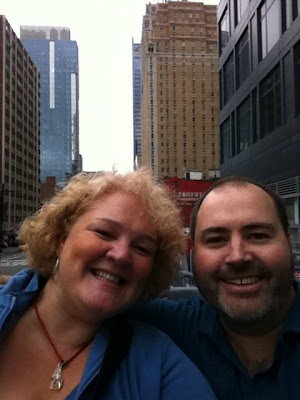 Battery Park is at the very Southernmost tip of Manhattan. It’s a green, leafy area. We became quite familiar with is since we queued there for nearly two hours while waiting to get on a ferry to go to Liberty Island.

We had some cute company though… 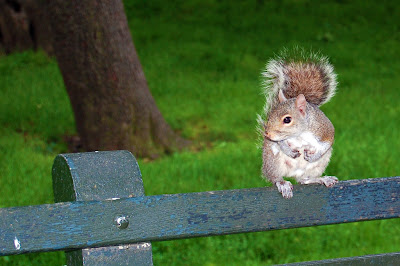 And had a bit of a view through the rain to inspire us. 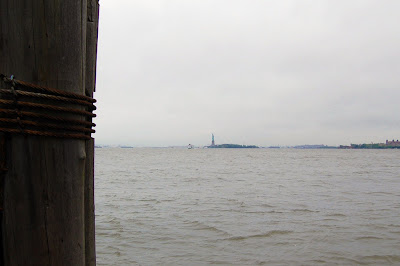 And even had plenty of time to admire and critique this bronze sculpture dedicated to the millions of immigrants who made the USA what it is today. 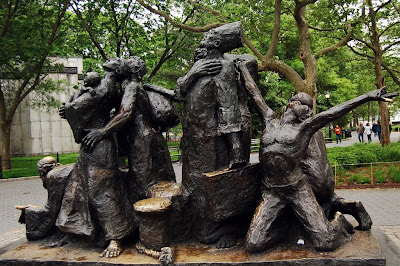 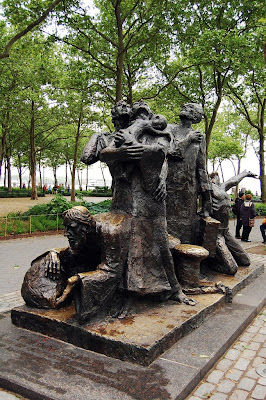 Poor folks, they look so hungry. I bet they didn’t get to try a cheese jalapeno pretzel from the pretzel stand while they were waiting. Despite our queue neighbours’ reserves I quite enjoyed mine. Actually, mine was so tasty, it made Mr Mac’s mouth water enough to try a pizza pretzel of his own. “Well, yours certainly look better than the ones we had yesterday,” said our queue neighbours from Kansas.

After the lengthy wait and a security check of our bags, we made it onto our ferry. 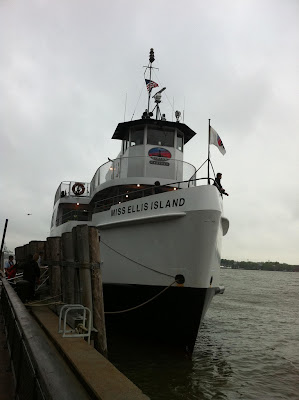 We grabbed ourselves a prime spot on the upper deck and set sail for Liberty Island. The trip out there was gorgeous, even if a little cold. I can’t help thinking that if this is how amazing the view is on a rainy day, how wonderful would it be with clear blue skies. 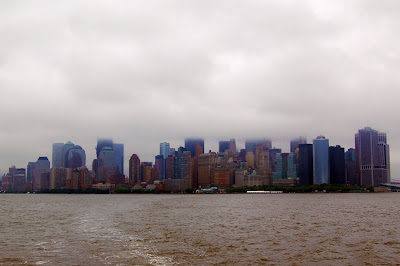 Another tourist offered to take a photo of Mr Mac and me as we sailed away from Manhattan. 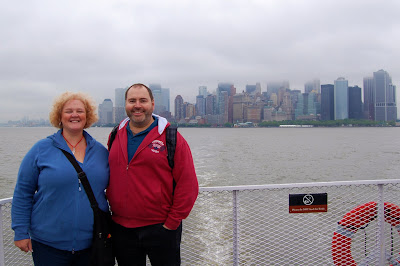 We soon discovered, as we got closer and closer to the Statue of Liberty herself that two hours wait was well worth it. She is beautiful, if a little stocky and with very well developed forearms. I suppose they have to be quite strong after all those years of holding that torch up there. I was at a wedding once where if the table needed more wine, you had to hold the empty bottle aloft so the waiters could see it. None of us on the table could hold the bottle above our heads for more than a couple of minutes at a time. 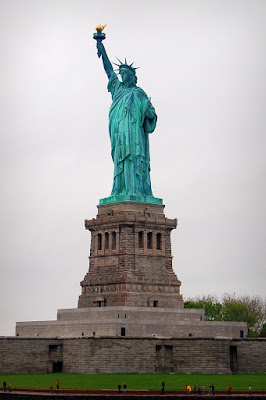 But, I digress, she is beautiful. 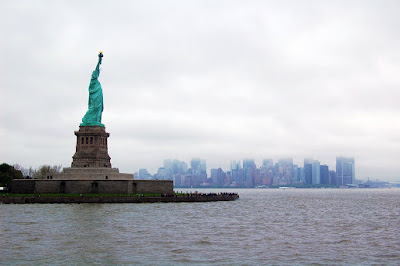 And so very well situated. We love her.

Other things that happened today were: Wall St, Broad St, Philly Cheesesteaks, Ground Zero, the most amazing and decadent steak dinner ever at a restaurant called Ruth’s Chris. Let me know if you want to hear more about any of that.