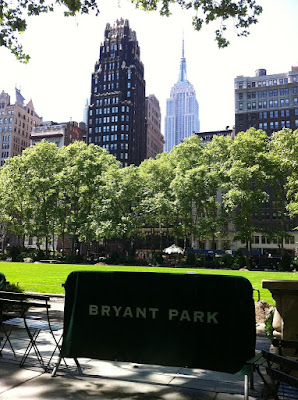 Wandering featured heavily in our New York time. We wandered most of the time, just walking wherever the streets took us. On our first full day in the Big Apple we woke late and leisurely. Mr Mac had one big aim in mind when we were there, to take The Sopranos Tour. He called and booked us in for the only tour available while we were there, that afternoon. After we had a definite plan for the afternoon, we took to the streets and wandered a while, at first, looking for somewhere to find somewhere to have a late breakfast/lunch. 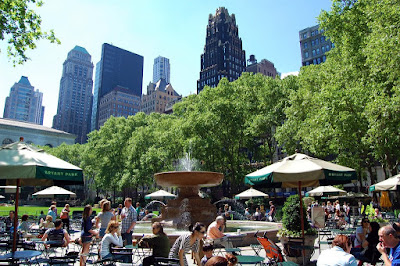 Our wandering brought us to Bryant Park which was serviced food-wise by a sandwich place called Wichcraft*. Mr Mac queued to get our sandwiches and coffee while I chose a table in the leafy park. I sat down and to my amazement, found myself looking right at the Empire State Building. The sandwiches were excellent, the view outstanding.

After we felt a little refreshed, we wandered some more. We walked towards the Empire State Building, finding loads of landmarks along the way. We also found this fellow complaining to police about having been beaten up the night before. 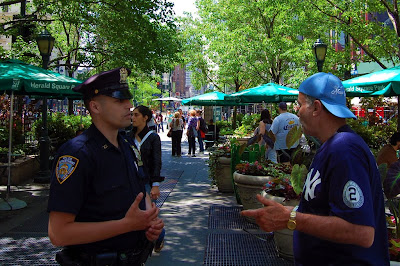 We found a shopping district with a Lane Bryant store (fashion for fat chicks) having a 50% off everything closing down sale. Glee! We found Macy’s and rode her old-fashioned wooden escalators. We found Victoria’s Secret and Sephora. I was in shopping heaven. And then, after a bit of lunch, it was time for us to head towards the Garment District to meet our Sopranos Tour Guide.

Part of the thrill of The Sopranos Tour was meeting an actor from Mr Mac’s favourite show of all time, Jospeh Gannascoli who played Vito Spatafore. The actor was selling Sopranos merchandising gear out of the back of his car which was a little off-putting but hey, it was still a thrill. 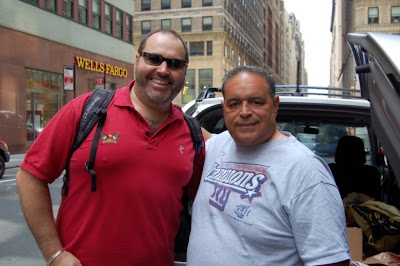 The Sopranos Tour takes you on a bus out of Manhattan and into New Jersey where you get a tour of loads of filming locations from the series. We saw the diner where Christopher was shot, Fr Phil’s parish church, the empty block where Satriale’s Pork Store used to be as well as driving past very familiar locations from the opening titles from the show.

The tour guide was actor Marc Baron. He was funny, entertaining and never lost for words. He made the tour a great experience. The whole tour was well worth the time, money and effort. We had a brilliant time.

There’s one photo not in that set which I took from the bus and is one of my favourite photos I’ve ever taken and that’s this: 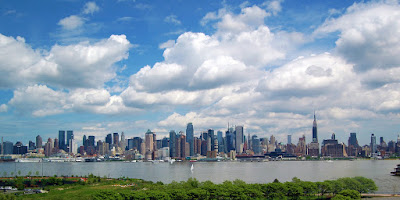 Click to make Bigger. Stunning (even if I do say so myself).

And after the tour had dropped us back into Manhattan we went back to our hotel room, had lots of super-tasty Chinese food delivered to our room (such an NY experience!) and spent a quiet evening listening to the Times Square noise from below and watching Limitless on hotel pay-per-view. We were exhausted!